← A BURNING ALZHEIMER’S QUESTION: CORNELIA, DO YOU THINK THIS IS A GOOD TIME FOR MY BATH?
SHE SMOKED UNTIL 93, LIVED UNTIL RIGHT AT 100…IS HER POUND CAKE THE SECRET TO LONG LIFE? →

There’s cornbread, and then there’s hoecake.

Mrs. Hate will not wax eloquently about cornbread, because it’s been done so often before and usually in such an overdone (to her) manner that those writings should suffice. She does, however, reserve the right to write (that sounds sort of linguistically funny) about cornbread at some future date as the spirit moves her.

So, now that cornbread has been summarily dismissed, let’s talk about hoecake.

And this hoecake is Mrs. Hate’s mother’s and grandmother’s style of hoecake. You’ll need:

Dixie Lily stone ground cornmeal is such a great little cornmeal. That yellow thick paper-y bag, that steel ring noosing the bag top that confounded Mrs. Hate so much when she was little with those bitten-to-the-nub fingernails—but then Mrs. Hate was pretty much interested in cooking only Toll House chocolate chip cookies and 1-2-3-4 cakes, so her inability to show that steel ring who was boss (i.e. get the bag open) did not bother her too much. Hoecakes were getting a little too close to vegetables and meats, the cooking of which just did not intrigue her at this stage in her life.

Another post can delve into the meat/vegetable cooking and the lack of interest; let’s just say it had a LOT to do with having to touch raw meat.

So, back to that bread of the gods and of people with good sense…hoecake.

You’ll need a Pyrex measuring cup, preferably a 4- or 8-cup.. Mrs. Hate’s not playing here—this cup is INTEGRAL to a good hoecake. 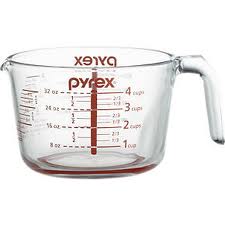 Let’s have some fun (depends on the readers’ ideas of fun) and just throw out the scratch concept of this recipe.

Throw some of that Dixie Lily cornmeal (plain) in the Pyrex cup. For help for those readers who don’t want to fly by the seat of their cooking pants, let’s say…hmmmm…close to 2 cups.

Add enough water (from the tap is fine) to make it really runny—the fork you’re using to stir with can tell you when it’s the right consistency. If your fork isn’t telling you that, either you’ve got the wrong fork, or you’re not listening hard enough.

Confession here: it’s 6.00 a.m. Mrs. Hate time, so she’s not exactly in the kitchen stirring up some hoecake at this hour. However, she IS thinking “do I take pity on the reader and try to nail down that amount of water to use?” So, a web search finds that one suggested proportion of cornmeal to water is: 2 cups cornmeal/3.5 cups water. Personally, that sounds like a LOT of water to Mrs. Hate, but she just cannot start up the hoecake cooking at this moment. Let your sense of touch and sight be your guide. Start out—cautiously—with maybe 1 cup of water and go from there. It’s better to add more water to a batter that’s too stiff than add more cornmeal to a batter that’s too runny. Why is this so? If you went down the route of adding more cornmeal, you might end up having so much batter that you could Feed the Five Thousand, one of Mrs. Hate’s favorite phrases. (Matthew 14:13-21)

NOW comes the artistic part. Pray for guidance and creativity and a calm, yet strong spirit (these are true words here, not fluff words—you’ve got to be on your game here).

You’ve got your spider on the stove eye. Now, a reader might wonder “what the heck’s a spider?”. In Mrs. Hate’s world, a spider is a flat skillet, with just a miniscule edge around it, while a skillet has sides. It goes without saying it needs to be seasoned cast iron (search for “how to season cast iron” at this point if you’re unsure/confused/didn’t grow up with/didn’t inherit good old skillets and spiders). Which brings up ANOTHER point (there sure are a lot of points to cover). You will be so blessed if you inherit your spider. If no inheritance coming your way, try some junk shops or something similar, or buy a new one and season it yourself. Good luck.

This spider from Lodge Cookware is the closest Mrs. Hate’s seen to her spider: 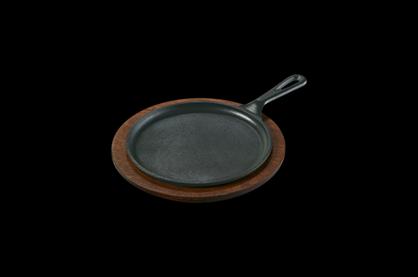 Pour a thin layer of bacon grease—left over from when you had a bacon craving—on the spider and start heating things up. Start out pretty hot (near the top of the dial; perhaps yours says “high”) and then lower just a touch—or more. You’ll want the hoecake mixture to sizzle when it hits the hot grease (hoecake cooking will start to get EXTREMELY artistic here).

Hold that Pyrex cup up kind of high off the spider (and the hoecake mixture most likely will have thickened, so let your fork tell you how much more water to add—a splash or so—to make it perfectly runny…but you don’t want it to be watery).

Splash down a goodly pour of hoecake mixture. The height at which you hold the Pyrex, the thinness of the mixture, and the resulting force of the splash is what makes these hoecakes perfection (lacy edged). Now, “goodly” perversely means a SMALL enough amount so that your spider will hold three, at the most four, hoecakes. There are recipes out there that say “cover the skillet with the batter and make one big hoecake” but NO NO NO that’s not the Mrs. Hate way. You want to make maybe six or seven spider’s worth of hoecake at three to four hoecakes per spider because your family and/or guests will be eating them as fast as you make them—and that is flat the truth and it will happen. If you’re making them right—a delicate lacy edge,a  thin, firm, tender middle, and nicely golden—they are…someone please invent a better, a stronger, word than addictive.

Get a thin metal spatula and start poking around up under the happiest hoecake edge and see if it’s firm enough to flip. You’re talking maybe a minute of cooking on this first side before turning the hoecake AND you will be twiddling with the heat AND twiddling with adding more grease as needed to keep hoecakes from sticking. Practice is the word of the hour here.

So, you’ve flipped it, you’ll cook it a little more, and the art is almost complete.

Put those hoecakes to drain on the brown paper bags. Using a paper towel to drain the grease would be so…yucky…blechhhh. You NEED that slick brown paper to make the grease behave and drain correctly so that the hoecakes will remain happy and crispy and tasty. Paper towels just make the hoecakes sad and soggy and pitiful. That heat and that grease and that steam hitting that waffly, limp paper towel? Nightmarish!!! You may, up to this point, have cooked a perfect hoecake, but if you drain them on a paper towel, your efforts will go south quick. (Mrs. Hate hates using that phrase, being Southern and all, but it is necessary here.)

If you’ve cooked them right, don’t worry about getting to sit down and eat with the folks. You’ll pretty much be standing there cooking more hoecake and will generally join the table when everyone else is about half finished eating. Mrs. Hate saw her mother do that often. Her mother was a saint, a giver, and creative to the core.

HATE POINT: not having hoecake to eat with field peas and okra and mashed potatoes and sliced tomatoes

LOVE POINT: a childhood filled with eating like this with vegetables from the garden and loving parents who were the best